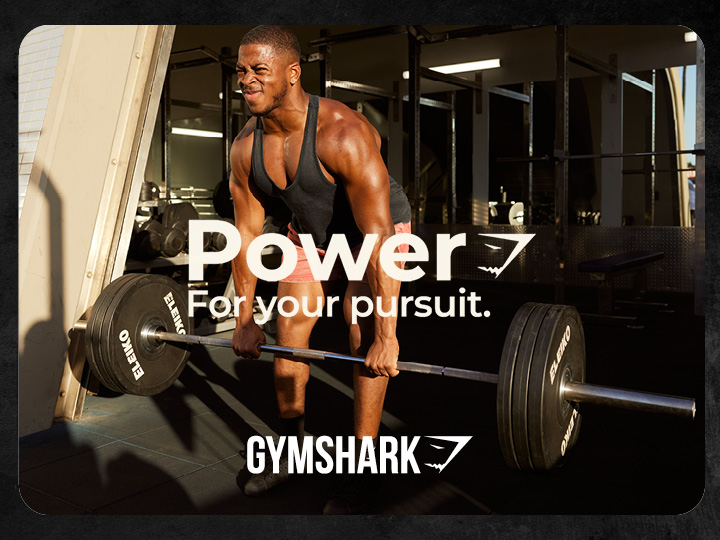 Power - From Then, Till Now: A Look At The History Of BodyBuilding

We're back again with another rendition of Power - the collection that is here for your pursuit, your big pulls, and your even bigger wins.

Power is all about feeling good and lifting better. This collection is designed for comfort while you lift under pressure, so expect heavy fabrics and oversized fits - perfect for those who view lifting as a lifestyle.

The old-school bodybuilding aesthetic runs deep in our veins, and the new Gymshark Power collection echoes the raw, gritty world of bodybuilding.

Stringer vests were our foundation, and since then Gymshark has built on that – just as champion bodybuilders chip away, year after year, slowly working towards perfection.

10 years has passed since the founding of Gymshark, and still we pay homage to our roots, for what we stand for and the community we stand by.

Gymshark wasn’t created by luck, it was through hard work, determination and sacrifice – words that resonate so well with the bodybuilding community. Our mission was, and still is, to create apparel specifically designed for the heavy lifter, who knows every rep counts.

We've never strayed far from our roots, and with that in mind, we thought it would be both timely and important to give ourselves a refresher and take a look back at the history of bodybuilding to where it all began.

To see how far we've come; from then, till now.

We've also got a sneak peek at the new Power collection, so keep scrolling for that.

The Origins Of Bodybuilding

Bodybuilding hasn't always been the phenomenon it is today, with the bright lights, live streams, and global travel. Originally, it was nothing more than a means of developing athleticism, helping to prepare the body for whatever challenges ancient Greece had to offer.

Soon after, through the use of bodyweight exercises and gymnastic movements, the idea of physique training and the 'bodybuilding look' was born. By the 11th century, our predecessors began to make use of resistance training and the utilization of weighted objects (e.g., dumbbells) to aid muscle growth, develop athletic performance, and improve the physique.

As bodybuilding stepped foot into the 1800s, those utilizing the newly found resistance training wanted to put their super-human strength to the test. Alongside wrestling, an archaic form of strongman was formed, where men competed by crushing rocks, lifting cattle, and pulling carriages in a display of might.

Although this was not a physique competition, the style of training was similar, and the events soon sparked interest from the public, who would spectate the strongmen as they created official lifting records.

Bodybuilders of the 20th Century

Fast forward to the 1930s, and the rise of modern bodybuilding began to take shape - solidifying the culture and building the foundations of lifting as we know it. Dumbbells, barbells, and other fundamental exercise equipment began to be used across the world as the desire for well-balanced physiques, fat reduction, and muscle-building training techniques grew exponentially.

With this surge in popularity, the focus on the 'ideal physique' became much greater, as innovative gyms and training locations such as 'Muscle Beach' in Santa Monica fuelled the new-found obsession.

When John Grimek won the Amateur Athletic Union's Mr. America competition in 1939, followed by the impressive physiques of Clancy Ross and Steve Reeves, the appreciation for modern bodybuilding physiques was re-enforced.

However, the Mr. America competition wasn't judged on physique alone but also on the athletic skill of the competitors. This lead to the creation of the IFBB (the International Federation of Bodybuilders) and NABBA (the National Amateur Bodybuilders Association), two associations with the sole focus of developing the bodybuilding culture and hosting large-scale competitions.

In 1965, the world's most popular and iconic bodybuilding competition, Mr. Olympia, was first held, built on Joe Weider's vision to take the sport of bodybuilding to a whole new level. The Olympia marked the introduction of qualifying competitions, new regulations, categories, and entry requirements, bringing a distinct change to the growing sport.

In 1969 there was a new kid on the block, by the name of Arnold Schwarzenegger, who challenged the undefeated Sergio Oliva relentlessly until taking his first Mr. Olympia title in 1970.

Schwarzenegger cemented himself as a household name in bodybuilding, alongside the likes of Frank Zane, Franco Columbo, Dave Draper, and Mike Mentzer. The Olympia rivalry between Schwarzenegger and Oliva continued for several years, as many famous bodybuilding names surfaced, dubbing this the 'Golden Era' of bodybuilding, iconically documented in the 'Pumping Iron' drama.

As the sport continued into the '80s and '90s, the impressive development in muscle density became more apparent. Athletes such as Lee Haney and Dorian Yates were breaking records, bringing much more muscle mass to the stage, something the earlier years of bodybuilding could not deliver on.

As bodybuilding stepped foot into the '90s, the sport was all about Ronnie Coleman, who took his first victory at the 1955 Canada pro Cup. Coleman then went on to win Mr. Olympia 8 times in a row, besting the record set by Lee Haney in the '80s.

What made Coleman even more unique and inspiring was his approach to training. Coleman ditched the generic approach of many using bodybuilding machines. Instead, he switched his focus to free weight training, placing more emphasis on the range of motion and time under tension during his training sessions. A method many amateurs and pro's use to this day.

Bodybuilding in the 21st Century

Undefeated at Mr. Olympia from 1998 to 2006, Coleman paved the way for modern bodybuilding and how we lift today. Since Colemans' reign at the top of bodybuilding, Jay Cutler and Phil Heath have taken numerous victories each, as the stage has become more diverse and challenging in recent years. No athlete has come close to replicating the record both Haney and Coleman hold.

At present, we are in another incredible era of bodybuilding; the sport and its competitors continue to develop, while the trend of lifting and fitness has taken the social media world by storm.

Bodybuilding competitions remain part of the furniture, and the 2020's saw Mr. Olympia take on a new champion, with bodybuilder Big Ramy taking the winner's title in both 2020 and 2021.

On a quest to create history, if Big Ramy defends the title for one more year, he'll be the first competitor to hold the title for more than 3 years since Phil Heath, who was Mr. Olympia 7 years in a row from 2011.

With both TikTok and Instagram becoming more popularized, both popular bodybuilders and lesser-known names have gained a large following for themselves, and the sport remains popular in its niche both online and IRL.

As we sit here blessed with the amazing history of our sport, respecting the accomplishments of the greats and the legacies they have etched in stone, it's important to recognize the fundamentals of bodybuilding remain the same.

The most expensive equipment, crazy training techniques, and exotic diets won't take you to the top. But, the obsession, resilience, and determination to reach your goals will.

The new Power collection is a huge nod to the fits of lifting past, paying homage to the classic oversized bodybuilding styles whilst also remaining functional with designs that have remained central to the lifting look.

Because if there's one thing that has remained true, even as the sport has developed, it's the bodybuilding aesthetic. You know exactly what we mean when we say that, and chances are, if you're reading this article, you haven't swayed much too.

What's in the collection?

Keen on more bodybuilding content? Check out our Conditioning category on Central for more articles on all things lifting and more.

Want to be the first to find out about new and exclusive collaborations? Sign up to the Gymshark Newsletter below and we'll provide you with all the info you'll need about upcoming events (both IRL and URL), new product releases, and conditioning tips and tricks so that you can be in the know, before anyone else.

Sports Bra Sizing: How To Get The Best Support From Your Sports Bra:

When it comes to your sports bra, we know that finding the one can be pretty hard. That’s why we want to try and make it all a little easier. Nicki Hall, our Senior Bra Developer here at Gymshark takes us through how to find the perfect sports bra size.

From big oversized sweats, to chic colour co-ordinated sets, the Gymshark Athletes are on hand to show you how to switch up your “iso” style.