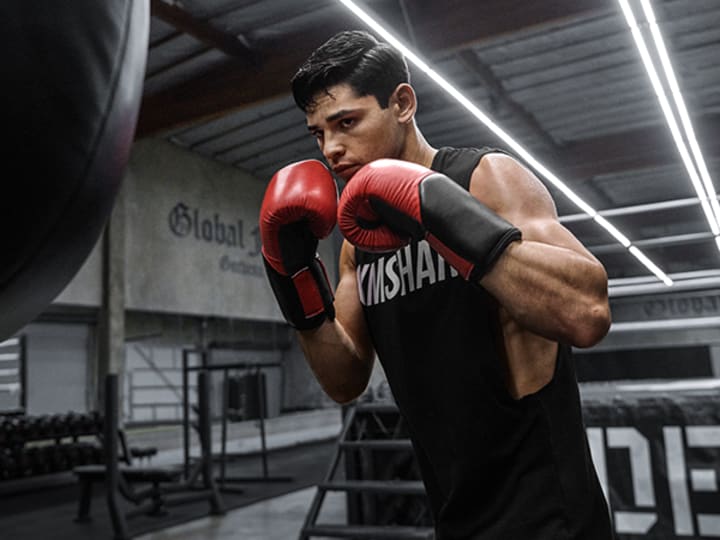 A boxing encounter sure to test two young fighters; will we see a timorous Avery Sparrow, or will he warm to the occasion as he faces such a redoubtable fighter, in Garcia.

Everything you need to know about Ryan Garcia's next fight against Avery Sparrow on Sept 14, including an exclusive interview (scroll down).

Gymshark Athlete, Ryan Garcia, will step back into the ring this Saturday, going glove-to-glove with Avery Sparrow. Coming off the back of a knockout win against Jose Lopez in February, Garcia is sporting a pristine 18-0 (15 KO) record, which he'll be looking to improve as he steps closer to a lightweight title fight.

"I hope he's ready because he talks a lot. He talks a lot of s**t and has thrown a lot of jabs at me pre-fight" - Ryan Garcia

Sparrow has less professional fights under his belt, with a 10-1 (5 KO) record, but still displays an evident ability to land powerful, knockout punches when it matters. Sparrow's previous fight saw him go ten rounds with boxing veteran Henry Lundy, bringing his win tally into double figures.

Garcia is a clear favourite in this bout, but Sparrow will be sure to make it as difficult as possible... Who do you think will win? Drop at the bottom of the page.

Read on for fight details and the Ryan Garcia pre-fight interview.

How has your training camp for this fight been?

"It's been good. I just keep the same mindset and that no matter what I've got to work in the gym. I keep on looking to improve and improve every day. So honestly, I'm sticking to the same mindset I always have: To stay focused and make sure I have the best performance I can have on fight night."

Your fight with Avery comes two days before Mexican Independence Day. How does it feel to be competing so close to Grito de Dolores?

"You know it's good and I feel honoured to fight on this day. As a Mexican-American, everyone is always claiming, 'You're not really Mexican’ you’re this and that. But I get to represent myself and the other fighters on Mexican Independence Day. I just feel honoured and I feel that I'm going to give the best fight for everybody to watch. I’m looking forward to it."

Your rise to fame has been one of the quickest, if not the quickest, in recent boxing history. How are you dealing with having the attention and limelight thrust on you at the age of 21?

"This is a new age. People get to know people quicker because of social media. And I just took advantage of it.

My rise to fame came quick, but I envisaged it, and I wanted it to happen. Now my level of where I'm at with the fame and where I'm going to be at with my career in boxing is going to meet real soon because I'm going to start fighting some top-level opposition.

After this fight, I'm not planning on fighting anybody that people think I'm going to knock out or anything like that. I plan on fighting tough people, and I want to get in there with them already. I want to get punched in the face a little bit. I want to feel the punches."

You have been training alongside Canelo for some time now. How does it feel to train alongside a multiple-time world champion every day and see him putting in the work?

Without looking too far into the future, what does the rest of 2019 hold for Ryan Garcia?

"I hope to have one more fight. I want to end this year with everybody knowing that I'm not here for easy fights anymore. I'm here to leave a statement into boxing history. After 2019, I'm going to leave it on a good note. And in 2020, I think that's where I'm going to show the world - and I'm talking about everybody in the world - who Ryan Garcia is. I think that's going to be a great year for me. And it even sounds good, 2020. I'm okay with me breaking out in 2020 instead of 2019.”

Would the ideal scenario for 2020 be main eventing more cards?

How does this fight with Avery Sparrow play out?

Who will win the fight? Drop a comment below