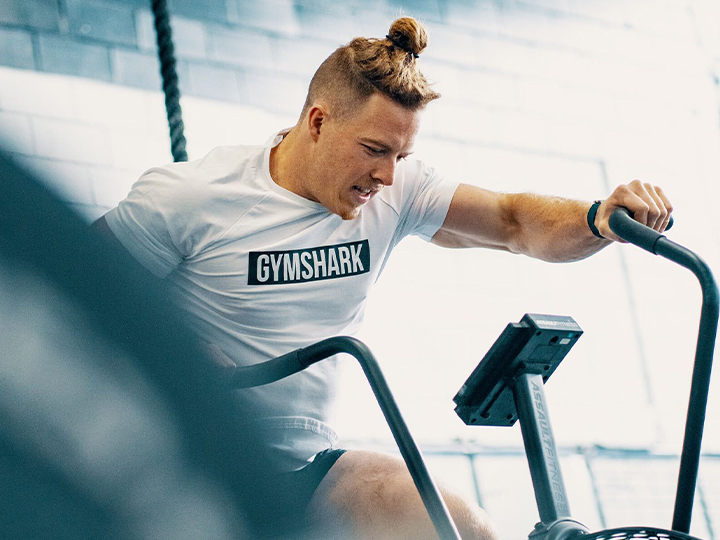 At Gymshark, we're all about conditioning. From lifting to running, and everything in-between - we're all on a journey to create the best version of ourselves, learning and growing as we encounter new physical and mental barriers.

Noah Ohlsen is no different.

The CrossFit veteran is still just 30-years-old, constantly challenging his mental and physical ability to become the 'fittest man in the world'.

Noah challenges his desire and passion for ultimate athleticism across a broad spectrum of 'modalities', pushing his strength, endurance and gymnastic abilities to the limit.

Noah's big lifts come in abundance, with a 540lb deadlift, 465lb back squat and a 285lb snatch. But functional fitness isn't just about the 1RM - bodyweight movements and aerobic endurance play a key role in competing at the highest level.

Boasting 72 unbroken pull-ups and a sub 19 minute 5km run, Noah Ohlsen's level of conditioning sets him apart from the competition, as he strives to become one of the best elite athletes in the world.

Upholding the key values of Gymshark, through family, conditioning and belonging - Noah Ohlsen is a truly unique athlete, and one we're so happy to welcome to the Gymshark family.

Who Is Noah Ohlsen?

Winning the 2016 Open wasn't luck, it was pure grit, determination and commitment to the process and goals Noah had set out to achieve.

But, CrossFit wasn't his first involvement in competitive sport. Noah's journey into fitness was led by his love of sport, developing his skill sets through training and competing in a multitude of disciplines, including lacrosse, water polo, swimming and wrestling.

Whilst studying at Univerity of Miami-Florida, in his home town of Miami, Noah became inspired by the physiques of current competitors and the demand for ultimate athleticism in CrossFit - shifting focus from his childhood sports to a newfound passion.

Here is Noah at his very first competition in 2010, at the age of 19. Followed by his first CrossFit Games appearance in 2014...

Fast-track back to the present, and Noah Ohlsen has over 10 years of hybrid training under his belt as he sets eyes on the 2021 CrossFit Games title, with an ambition to better his all-time best 2nd place ranking in 2019.

Join Noah on his journey:

Join The Family
Conditioning
By Gymshark