Everybody Moves | Explore the stories of drive and expression

What moves us drives us, and how we move and what we choose to do with that, is how we express ourselves. How do you show expression? 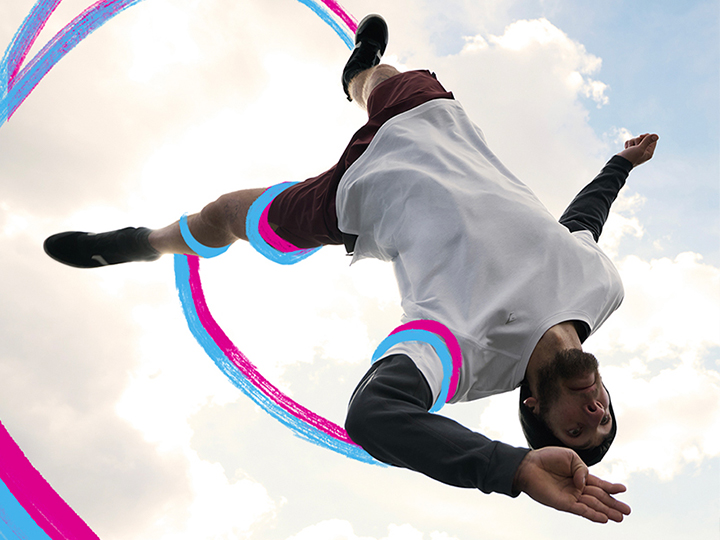 United We Sweat invites people to discover the strength of the conditioning community, by celebrating the unseen and unspoken effort that we all have in common.

It's the late nights and the early mornings. The obstacles and the risks. The mental and physical blocks. And the barriers that we overcome.

Where it doesn't matter where you've come from, it only matters where you're going. It's a community of unity where everyone belongs. And everyone matters. Where you never have to watch your back, because you know everyone has your back...

What moves us drives us, and how we move and what we choose to do with that, is how we express ourselves.

Throughout April, May and June, experience the drive and expression of those in our community. Find out their story of how, and why they move.

Jump To A Story:

noun - the activity or sport of moving rapidly through an area, typically in an urban environment, negotiating obstacles by running, jumping, and climbing.

A brotherhood of like-minded individuals from various backgrounds, Team PHAT are bound together through their love of movement, united in the streets by their passion for parkour – a discipline with a worldwide community.

PHAT is a parkour team made of 8 athletes: Ronnie, Klaus, Alejandro, Arthur, Abdullah, Orlando, Devon, Luke and Jacob, based in London.

Famed for their Phat Parkour Jams, Team PHAT are proud of their positive mindset, and community feel ­– to them, fitness is moving across all axes, no matter the obstacle.

A lover of challenges, Anthony Ferraro moves in more ways than one.

With a past in wrestling, Ferraro now turns his attention to judo, skateboarding, guitar playing and guest speaking – but the biggest challenge is moving this way, blind.

Ferraro originally turned to wrestling when other sports such as basketball and soccer were not possible with visual impairment, inspired by his father and an older brother who were both wrestlers.

Motivated from a young age, Ferraro was always going to take on the world and the obstacles it presented him, and following a documentary filmed by his late brother, the United States Olympic committee reached out to Ferraro for him to join their judo training camp in 2017.

Today, Ferraro still moves in more ways than one, with a key focus on training to compete in the 2024 Paralympics – with his guide (his wife) by his side, working together to make their next move.

Dr. Seun. 2 time Olympian uniting communities all over the world

Dr. Seun believes the success of an athlete is down to the team around them, and so has dedicated her life to providing athletes the team and tools they need to succeed. She now works as a chiropractor and biomechanist as part of a group that is building communities around athletes to help them become and achieve their best. She also works closely with athletes and coaches in Nigeria to build winter sport athletes and winter sports as a whole.

Dr. Seun has founded Extra Wellness Centre, a new way for her to bring her team-based approach to athletes and active individuals. The next step in development is to scale up and create a one-stop-shop for the people she treats, and in order to achieve that, she needs $300,000.

Just like Dr. Seun brings communities together to support athletes, we want to bring the Gymshark family together to support her. Gymshark have donated $10K and we’re sharing the link with you here so if Dr. Seun has inspired you, you can donate too: https://ifundwomen.com/projects/where-we-go-extra-mile

Like her ‘fit? Check out the new Speed range

After a breakup, Kamry James read an article online about how to be happy, and it suggested ‘do something you loved as a child’. For her, that was roller skating. So she gave it a go. And the rest is joyful, vibrant, beautiful history.

As Kamry explored the skating space more and more, she found a stark lack of representation, so she set about fixing it. She founded Sistaskate - a group specifically for Black and Brown female and non-binary skaters to move freely and express themselves without any fear of judgement. The group she gathered now provides a safe space, and important representation, for so many skaters. The community value inclusivity, hard work and determination above all else.

For Kamry, getting back into roller skating has opened up a whole world of movement and expression to her again, she’s now taking ballet and hip-hop class and continuing to hone her skating skills. Her movement is all about finding joy and freely and fully expressing herself.

So what’s the one thing she wants you to know? Don’t let fear hold you back. Fear of opinions, fear of expectations, let them go. Do what you want to do, and do it out of love.

Her ‘fit is just as good as her attitude, check out the Strike Sports Bra:

Zaila Avant-Garde: a four-world record holder, a basketball star and a spelling bee champ. All at just 14 years old.

It’s not often that childhood dreams become a reality at such a young age; Zaila Avant-Garde started her basketball journey at age 5, set her sights on achieving a world record at age 8, and after a few years of training tirelessly, she reached her goal by age 13.

Zaila’s parents introduced her to basketball to burn off some excess energy, as she was one of those kids who run around the house. All. Day. Long. But now, it’s that same energy and excitement that motivates her before every match.

On game day, when Zaila moves, she doesn’t walk, she runs. She moves because she’s passionate about her sport. She moves because it allows her to express herself, and she moves to inspire other young girls. Zaila shows us that if she can move in every space, there’s nothing stopping us.

It comes as no surprise that Zaila’s sporting and academic achievements have earned her praise from the likes of Barack Obama, Jill Biden and LeBron James as well as being named Sports Illustrated’s Sportskid of 2021. But it’s her ‘we can do anything’ attitude that really caught our attention. Her mission is to show other young girls that if they chase their dreams relentlessly, no matter what anyone tells them, they can achieve anything and everything.

Like Zaila’s fit? Check out the new Sport Collection.

What drives you? And how do you express through the power of movement? Share your story in the comments below!

United We Sweat
By Gymshark