Following their Black History Month event with Gymshark last October, the influential roller skaters open up about what they stand for and the responsibilities they shoulder for the greater good. 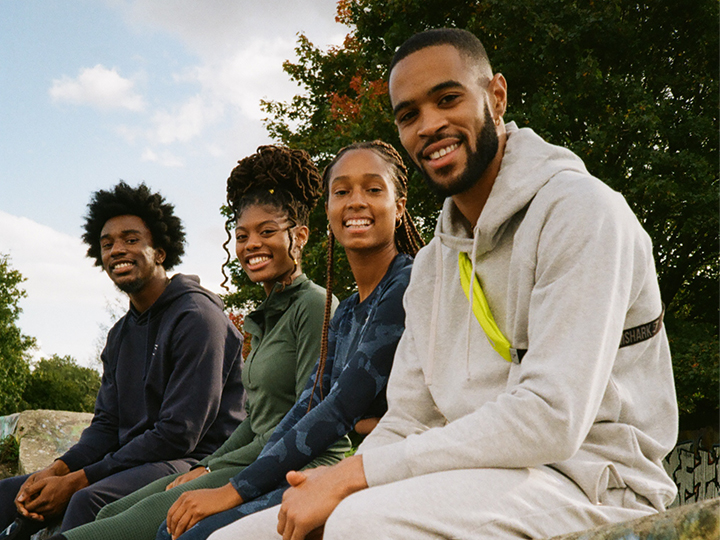 CONDITIONING IS EVERYTHING WE DO TODAY TO PREPARE FOR TOMORROW.

I can’t shake the feeling that roller skaters Rue-Ann Paisley, 24, and Devante Walters, 26, are playing an epic game of Truth or Dare after our Zoom conversation. They cruise through the ‘dare’ part every time they avoid injury after pulling on artistic skates or converts (ice hockey boots converted into roller skates), to freestyle socially or drill alone. Then the duo, who met skating in Colindale last year, document their truth on their social media channels to inspire their digital and IRL communities.

‘Being able to represent myself and influence other people to skate is really humbling,’ shares Rue-Ann, a jam skater and casting researcher who’s currently based in Manchester. The 24-year-old’s rhythm dancing on skates flows so beautifully for her 10.8k Instagram followers - and in music videos for MoStack and AJ Tracey - appearing much less dangerous than Dev’s thrilling street/speed skating. ‘I like to get out on the streets and roads and make use of my environment, ' says the 26-year-old South Londoner. On his rising Devante2you YouTube channel, you can watch jaw-dropping skills as well as police interactions that are frustratingly common for roller skaters.

As Dev puts it, given he and Rue-Ann are living it and visibly widening representation at the forefront of the UK skating community by embracing exciting new opportunities, there are three main aspects of roller skating today.

‘The physical aspect of keeping fit, the mental aspect of saving yourself, and the social aspect of meeting other skaters and feeling a part of a community.’

Popular opinion is coming round to the fact that roller skating is much more than just a fun nostalgic hobby. Clearly, the roller skaters on our social media feeds train like athletes – Rue-Ann says she was skating for 12 hours a day in lockdown – and it’s a sport that also requires conditioning. Thanks to mesmerizing clips from the likes of @oumi_janta, @chey_may, and others, the spotlight is firmly trained on the roller-skating community right now.

This cross-generational lifestyle spearheaded by disenfranchised Black people by various accounts rolled on nationwide long before the TikTok trend, and the urgent need for freedom flared up during lockdown. It’s impossible to put a figure on how much the UK roller skating community has grown in this time, given it’s still more underground than mainstream, but surging content engagement, Google searches and roller skate sales (500%-800% growth for retailers Locoskates and Slick Willies according to The Guardian), definitely suggest an upward trajectory.

Building on that, Rue-Ann and Dev planned a Black History Month link-up that around 100 roller skaters attended as part of their Gymshark partnership in October. ‘The love and support that we got was mad,’ recalls Rue-Ann. But behind the smiles and skills, the struggle is real for the UK roller skating community when looking for spaces to practice. Rinks and multi-purpose halls are few and far between, and you can only skate outside if it’s light and dry. ‘We have barriers against us, whether it be places to escape, feeling welcome, safety when going home after late sessions too,’ lists Dev. But he and Rue-Ann are determined to leverage their partnership to sustain the scene and improve these issues. ‘I want to provide free spaces for people to go to, even if we start off in different community halls in London bi-weekly or monthly,’ Rue Ann vows.

Dev Walters: I was 16, and there was a youth center by my college. One particular day, they had skates and a mini roller disco where my friend Dave and I had the time of our lives. We bought skates, started skating from the station into college, and we were suddenly known as ‘The Skater Boys.’

Rue-Ann Paisley: I used to do athletics aged 12 to 18: 100m and 200m, and I always had an interest in roller skating, but I didn't want to jeopardize my ankles. [When I stopped running] I started skating at Fix8 in Wembley. I looked at everyone like, wow, this is so cool!

How does skating make you feel? What’s your favourite move?

Dev Walters: Alive and empowered. People see me skating on the road and look on in awe. The trick that I like to do the most is skating backward fast between different obstacles. My whole thing is getting as many people to experience what I feel when I skate through my videos or by actually skating themselves.

Rue-Ann Paisley: I don’t have the best self-esteem, but skating has really transformed my confidence. I don’t really like being on camera, but if I’m on my skates, I’m fine. I might have a really shit day, skate, and it’s very therapeutic and grounding. Stormskater inspires me, and my favorite move is definitely spinning: on my toes or trying cross and low spins.

Tell us about the art of falling and how you bounce back from injuries.

Rue-Ann Paisley: When I'm doing more technical tricks, I fall all the time and I have to mentally prepare to land safely. Practice makes progress and the amount of scars I have really doesn’t bother me. It’s about going for it mentally because your body will only take you so far.

Dev Walters: If you're going quite fast, you're better off rolling to take the impact. When I was 17, I was hanging on the back of the bus, lost control and fell over. It’s a psychological battle with yourself to bounce back; you just have to get over it.

Where does conditioning come in, and are there benefits to doing it?

Rue-Ann Paisley: I’ll do workouts off skates that strengthen my core and legs so I can do moves and have good posture. I also bought a spinner that you stand on and it spins on the spot. I’ve only done it a few times but I can feel a difference. On skates, it’s just drilling the same move over and over again.

Dev Walters: A lot of repetition is needed, muscle memory too so that when you do certain moves, your body naturally remembers. Also being strong enough to hold your body weight and physically fit enough to skate with cardio.

What are the biggest misconceptions you think people have about roller skating?

Rue-Ann Paisley: That we’re antisocial delinquents that just hang about. People don't understand the crap that we go through having to skate away from police, getting kicked out of places or skating in unsafe places.

Dev Walters: It personally annoys me how whenever anyone thinks of roller skating, a white woman in a bikini with palm trees seems to come to mind when it’s huge in the black community. Generally speaking, roller skating is seen as more of a feminine kind of thing as guys are more associated with blades.

Rue-Ann Paisley: This time last year, the pages I was seeing were probably predominantly women but here are mixed skate groups and I know women and guys who do street skating. Age, race and religion doesn’t limit you – you have the OGs skaters in Hyde Park and it’s a melting pot of different careers where everyone can come together, learn from each other and collaborate.

Does roller skating’s roots in the civil rights movement in the US resonate with you and spur you on?

Dev Walters: I don’t know the ins and outs but the struggles that you typically go through as a black person closely relate to the struggles of a skater. Being a black skater doubles it up. Black people know it's hard to feel welcome anywhere you go. You're always looking for someone that you can relate to and it's the same thing in skating. When you go somewhere to skate, you’re always checking your back.

Rue-Ann Paisley: From documentaries I’ve seen, rinks were shutting down anyway but as Black skaters would wear baggy trousers and skates with smaller wheels, they weren’t allowed to attend anyway. There was segregation but it’s more integrated here, though skateboarding is more white and middle class which might influence investment. I went to one of the Black Lives Matter protests in skates with four or five skaters and it was nice to represent because skating is part of my Black identity.

Finally, how are you paving the way for the next generation of roller skaters?

Rue-Ann Paisley: By planting the seed – I bought my little half brother some skates and he loved it. He might not skate often but it’s something that he’s always going to carry with him. It's also nice to do skate campaigns and show people in wider society that look, there’s a Black person doing this amazing thing.

Dev Walters: By being recognised for our amazing talent. There are some amazing skaters in our community, like Next Chapter collective and I learnt a lot from the original Stratford skaters. My long term vision is to get kids involved and then the younger generation will add their own flavour.

Felicia Pennant is an award-winning, NCTJ-qualified journalist and creative from London, focusing on fashion, football, lifestyle, and cultural commentary. She founded trailblazing football and fashion platform SEASON zine in 2016 to counter the male, pale, and sometimes stale state of modern football culture.