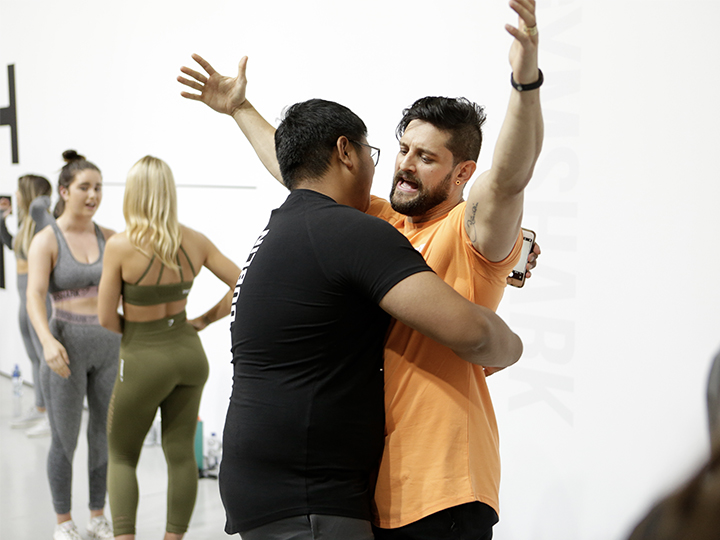 How To Be Part Of The Gymshark Community...

Gymshark Is About Belonging...

And All You Have To Do Is Show Up.

Our badge belongs to anyone who finds belonging in it.

And all you have to do to be a part of the Gymshark Community is show up.

But what does that really mean?

Well, it's often the glamour and success that receives all the attention and respect, but we believe in the idea that it should go to the aspiration and the commitment of 'the journey' itself.

Those early steps you're taking are the same ones your idols took when they began, so keep following. Trust us, each step you take and each time you show up will inspire others to go further. Being present is the catalyst for progression.

Humans of Conditioning celebrates the trials and triumphs of some of the most extraordinary ordinary people on the planet.

Today, we're highlighting just a handful of the wonderful stories from our family - of those who show up day after day to fight for what they believe in.

Gymshark athlete and UFC Heavyweight Champion, Francis Ngannou is a Cameroonian mixed martial artist living and training in Las Vegas, Nevada, with a hunger to achieve champion status in the UFC Heavyweight Division.

His humble beginnings and love for his hometown in Cameroon have curated a man destined to help others show up. Through the Francis Ngannou Foundation, he's since created an MMA gym and further facilities to help engage, train and care for people back home.

Physical strength. It's something many of us pursue in our conditioning journey, but there are some things you can't train, or prepare for.

When Sophie's spine broke in two, her world flipped, but only as far as she let it. Sophie turned her life-changing injury into a positively inspiring story, raising disability awareness and educating others - changing the lives of thousands.

The strength she has shown away from the gym is admirable, and her love for training is stronger than ever.

To Those Who Work When They're Not Being Watched:

A far cry from his bartending days, Fergus Crawley is now a hybrid athlete fighting for a greater cause.

Raising funds and awareness for suicide prevention charities through challenges which push him both mentally and physically, Fergus' last feat of fitness saw him attempt the world's first vertical marathon.

A challenge which saw it attempt to summit Ben Nevis, the highest peak in the UK, 32 times over 11 days. In total this would accumulate 540kms of travel and 42,200m of elevation gain - the equivalent of a marathon.

With nascent 'tache growth, Crawley encourages others to not only show up, but talk up.

Your journey may be a physical one, at times more of a self-discovery, but you have to understand that it's a non-judgemental relationship with yourself. You're recognising your own strength. You're building self-trust. You're working on you.

And we're here to support you each step of the way.

Gymshark Is About Belonging...

And All You Have To Do Is Show Up.

What's the biggest lesson you've learnt from your journey so far? Let us know in the comments below, we'd love to hear from you!